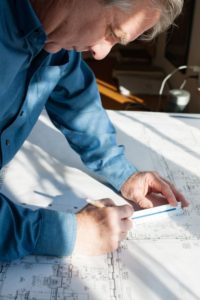 Peter Taggart was championing high-performance homes long before it was hip. Today he’s a leader in Maine’s green building movement.

Long before disruptor became a buzzword and businesses began singing the praises of “out of the box” thinking, Peter Taggart was, to use another cliché, marching to the beat of his own drum. For over 28 years, he has been at the forefront of the green building movement, promoting sustainable building materials, passive heating, and conscientious restoration. In 2006 he built the first LEED-certified house in the country in Freeport, with high-performance windows, Forest Stewardship Council-certified framing lumber, and radiant-heat flooring, as well as passive solar heating.

Being on the “bleeding edge” (as he puts it) has never bothered Taggart. He has been a freethinker for as long as he can remember. As a child, he was obsessed with mechanics, with parts and gears and the mysterious inner workings of things. “I would get my mother to bring me to the recycling center, where I would grab bicycles, lawn mowers—anything that looked interesting. We had a three-car garage, and one of the bays was mine. I would put a motor on anything.”

Taggart is now the owner of four Freeport-based building and woodworking companies that operate under the umbrella of Taggart Construction. His unruly intellect has led him down an unconventional path to success. After his high school graduation Taggart took off, hitchhiking from Massachusetts to Maine. Although he had no solid plan, he knew he wanted to return to a resort in Belgrade Lakes, one of his favorite summer spots. There, he worked on boat motors and tractors, hauled firewood, and cleaned fishing boats. “Knowing other trades has taught me to appreciate and understand each one,” he says. “This has been especially true as I began to head down the green building path.”

These days, Taggart has less time for manual labor. He manages a team of 26 employees and an extensive project file that includes restoration jobs, custom millwork, and eco- friendly construction. Over the years, his interest in motors and fuel morphed into a fascination with green building and sustainable energy sources. As his skills in the mechanical field grew, so did his awareness of fossil fuels and their limitations. Today two gleaming white electric cars, charged up and ready to head out to a job, sit outside Taggart’s downtown Freeport office. When I step inside, he motions to the floor: “You can take your shoes off to feel it, if you want,” he says. Although it appears to be a normal hardwood floor, below a thin layer of bamboo lies concrete, which is heated by a system of tubes and gives off a gentle, radiant heat. I keep my shoes on, but I bend down to feel the warmth that seeps up from the floor. It feels heavenly.

“Unfortunately, we’ve had to move away from heated floors in some of our recent projects,” Taggart says as we move into the bustling workshop, where his team is prepping a set of old windows for restoration. “As we started to really tighten up buildings and make them very energy-efficient, we realized that radiant heat isn’t that compatible and doesn’t work with the newer techniques.” Radiant floors, he explains, work best when kept at a consistent temperature. “If you have a passive solar house, especially one with south-facing windows, it gets hot when the sun is out. Then it cools quickly when there is no sun, and that means you have to be able to adjust the temperature more rapidly,” he says. “While you can play with the thermostat for heated floors, that’s not the best way to use them. So we just save them for bathrooms now. It’s nice in a Maine winter to step from a hot shower onto a warm floor.”

Taggart engages in this kind of mental analysis every day. He is constantly trying to find new ways to reduce energy usage, find safe building materials, and build healthier, more efficient homes for his clients. His workplace functions in part as a testing ground for new technology. There is a heat pump in the lobby, which takes in outside air, extracts heat, and blows it into the room. Upstairs, the offices are decorated with furniture and cabinetry made from various types of fast-growing or repurposed materials, such as sorghum plant stems and sunflower seed shells. And of course, there are solar panels on the roof of the building, which Taggart and his team use to charge their electric cars. “We have a meter so we know exactly how much power we use. We can even plug tools into the truck and run them off that energy, so we can work on a job site with solar power,” he says. As an added bonus, employees never need to take their own vehicles to jobs.

But Taggart isn’t satisfied with greening his own spaces. He is also an active member in the design- build community, where he promotes energy-efficient practices and helps spread awareness about options available to eco-minded builders. In the late 1990s, he was a founding member of Builders and Architects for Sustainable Environments, a group that met once a month to discuss green building topics. In recent years, he has worked with the Northeast Sustainable Energy Association, donating his time and knowledge to help “sustain the sustainers” by teaching profitable business practices to environmentally conscious business owners.

“When we were first starting out, people thought we were a little weird, a little rogue,” Taggart recalls. “Now eco-friendly design has gone mainstream, and that’s a very good thing.” However, he is quick to point out that there is still a lot of work to do if we want to slow the ongoing depletion of natural resources. While much of this work is political or scientific in nature, he believes the next big step for companies like his is to make green homes “the norm.”

“We came through the early-adopters phase and the experimental phase. Now we’re finally understanding how to make green and high-performance less costly and more widespread,” he says, noting the drop in price of once-expensive items like solar panels and triple- glazed windows. While green building won’t fix all of the planet’s environmental ills, it signifies a step in the right direction. “More and more people want to see the world change,” Taggart says. “And I think we’re closer than ever.”

When Peter Taggart renovates an old Maine building, it also gets greener
May 14, 2017